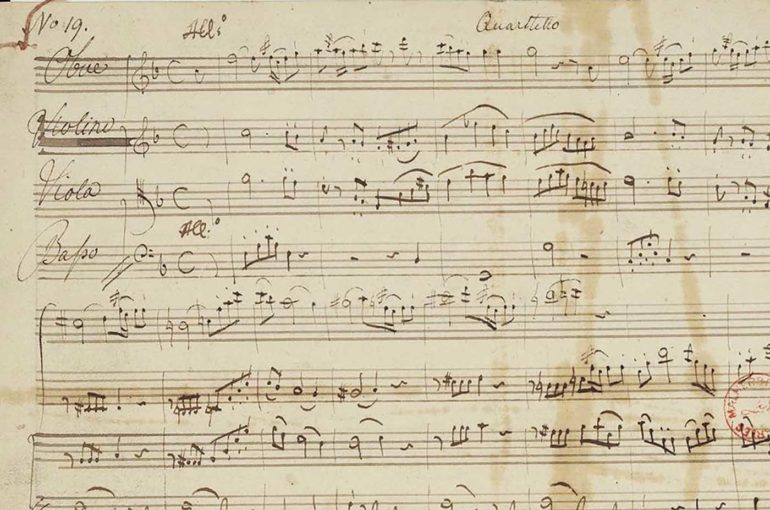 Photo : frontpage of the manuscrit

In early 1781, Mozart was in Munich where his opera Idomeneo was premiered. He wrote the Quartet K.370 for Friedrich Ramm, principal oboe in the Bavarian Elector’s orchestra. “His dazzling career led to appearances in Italy, Paris, London and Berlin. Later he played chamber music with Beethoven” (Alfredo Bernardini).

This piece is full of virtuosity, and the oboe is pushed to the limit, especially in the upper register : the piece ends with a (rare) and thunderous F6.

According to H.C. Robbins Landon, “Mozart had met Ramm in Mannheim at the end of 1777 and was immediately captivated by the quality of his sound, which seemed to him to be of a ravishing purity. In this work he discovered the intimacy of chamber music: he avoided concertante writing by finding many subtle ways of integrating the voices, notably by carefully interweaving melody and counter-melody.

The second movement is an aria in D minor of great emotional force, only thirty-eight bars long. The final rondeau features an extraordinary episode in which the oboist plays in 4/4 time while the strings continue their accompaniment in 6/8 time as if unaware of it. This section begins very ominously in the minor, and the tension is only relieved by the simultaneous return of the major mode and the compound measure. The reprise of the rondo theme shows Mozart’s taste for the high register of the oboe, as evident at times as his notorious predilection for the low register of the clarinet.”

Mozart and the oboe (Bruce Haynes)