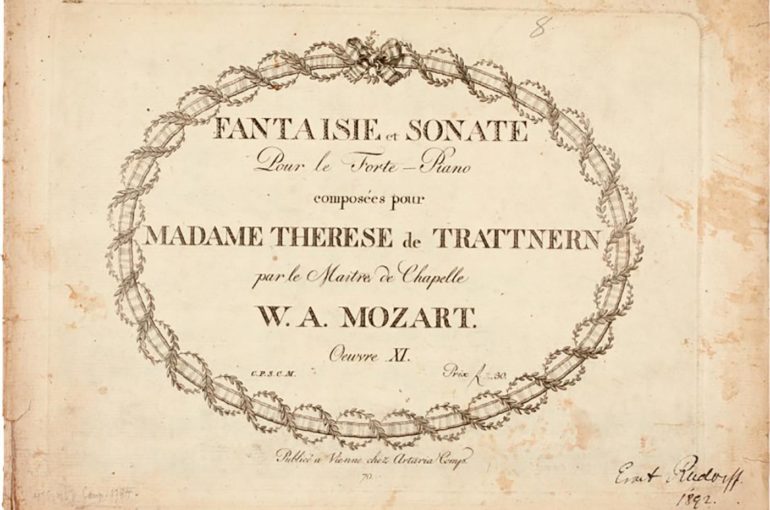 This astonishing Fantasia is probably one of Mozart’s most innovative compositions for solo keyboard. It was composed for Therese Trattner (1758–1793), and published by Artaria in Vienna towards the end of 1785, alongside the Piano Sonata in C minor K.457.

Therese (born Maria Theresia) Trattner was the daughter of the court mathematician Joseph Anton Nagel. In 1776, she married the widowed Johann Thomas Trattner, a Vienna publisher and bookseller that Mozart knew well. After Mozart settled in Vienna in 1781, Therese Trattner became one of his first piano students, and surely one of the most talented, she remained so until the composer’s death. In 1784, the Mozarts lived in Trattner’s house on the Graben in Vienna. Well connected in Viennese society, Therese Trattner helped him to organise three subscription concerts here, at which the Piano concertos were performed and which further promoted his reputation as a piano virtuoso in Vienna. She also gave concerts (“academies”) herself in her flat in the Trattnerhof, at which Mozart was present.

Although published together Fantasia K.475 and Sonata K.457 were conceived independently: the rediscovery of the autograph of the two works confirms this.

“Starting in the key of C minor, the Fantasia is marked Adagio, but then, after a section in D major, moves into an allegro section which goes from A minor to G minor, F major, and then F minor. It then moves into a fourth section in B-flat major marked Andantino and then moves to a più allegro section starting in G minor and modulating through many keys before the opening theme returns in the original tonic key of C minor–the remainder of the piece is, for the first time, grounded in this key, in which it comes to a very firm end.”

According to Jannie Burdeti, the Fantasia, “presented in six contrasting sections, begins with a solemn melodic line in octaves. While its chromatic underpinnings recall the character of Bach’s Musical Offering, its drama certainly foreshadows Beethoven’s C minor mood. Mozart is able to provoke a sense of inevitability with his use of contrasting ranges, silences, and a descending chromatic bass line. What follows is an oasis of D major, but the moment is short-lived. A dark and stormy passage is soon unleashed with fast tremolos in the right hand. Mozart eloquently and masterfully ties together all the vacillating emotions and wandering keys with a recapitulation of the opening section.”

Like for every Piano piece written by Mozart, our favorite version of the Fantasia is the recording by Kristian Bezuindehout on pianoforte, published by Harmonia Mundi.

You can also watch Bezuidenhout play the Fantasia, in a concert filmed in 2019 at the Fundación Juan March in Madrid.