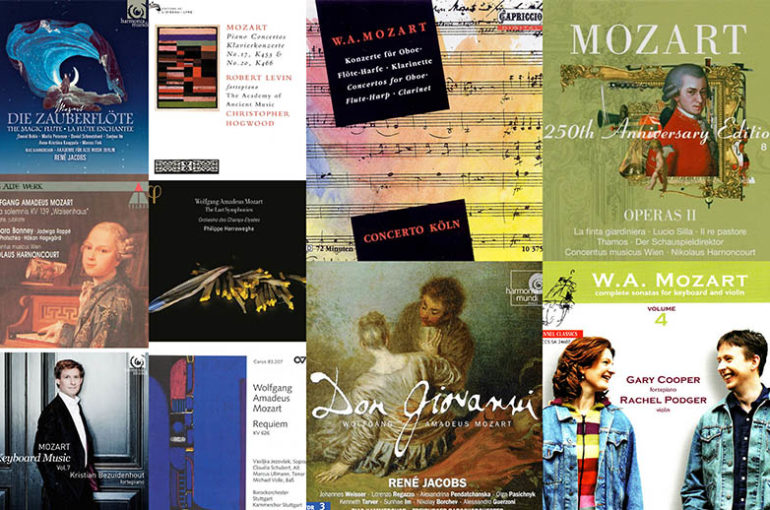 Selecting only 10 recordings from Mozart‘s immense discography, an impossible mission?

And yet, at allaboutmozart.com, we took up the challenge! With a great deal of subjectivity obviously, and doing our best to cover as many musical forms and periods of the composer’s life as possible. You may notice our ”Best of” includes only rather recent recordings on period instruments, which is by no means a coincidence: in our view, the interpretative developments over the last few decades have been too decisive not to make that choice.

Listen to all this wonderful CDs in our playlist !

For Teldec, Nikolaus Harnoncourt achieved a masterful complete recording of Mozart’s Sacred Music, which is now a reference for most of the works included, with the possible exception of the two masterpieces of the mature period (Great Mass in C minor and Requiem). This recording includes the Missa Solemnis K.139, composed at the age of 12, and which appears to be a magical succession of small pieces, some of which are incredibly dark, and whose significance only Harnoncourt was able to grasp. Also included is the famous (but over-recorded) Exsultate, jubilate, a motet written for the castrato Rauzzini, here performed by soprano Barbara Bonney, at the peak of her art.

Between the too well-behaved baroque interpretations “à l’anglaise” (Hogwood, Gardiner, etc.) and the more personal but very tortured ones (Harnoncourt, Currentzis), there are actually not that many excellent versions of the Requiem, despite a plethoric choice. We therefore suggest you check on Frieder Bernius who, with young soloists, an ensemble and a chamber choir, offers a refreshing and marvelously balanced version. Highly recommended is also Ton Koopman, who brings together a sublime quartet of soloists – led by Barbara Schlick – in one of his best recordings (hard to find though!).

As usual, René Jacobs makes a clean sweep of the past, starts from the original score and text, animates the recitatives and reinvents a work that we thought we knew by heart. Some conductors had led the way (Norrington, Östman), but without the imagination and the sense of drama of the Ghent conductor. And without an orchestra as virtuoso and colourful as the Freiburger Barockochester. The cast is very young (including Johannes Weisser in the title role) and remarkably homogenous, two qualities that are essential for this opera. None of the singers have anything to be ashamed of when compared with their glorious predecessors. Since then, Teodor Currentzis has recorded a superb version of the same work, but he will be preferred in Cosi fan tutte.

Once again, Jacobs deserve the very same comments as for his Don Giovanni recording (see above). In his version of the Magic Flute, it may even be said that he goes a step further in terms of subjectivity (and genius if we dare say!). The music is punctuated with even more inventive additions, and – at last! – the spoken text can be listened to without being bored. The Akademie für Alte Musik reaches an impressive instrumental perfection. At the top of a flawless cast, Marcos Fink will make you forget the Wagnerian Sarastros the discography is full of, while duo Tamino-Papageno duo radiates youthful joy. Last but not least, Marlis Petersen, a great Mozartian artist, will bring tears to your eyes as Pamina.

What? Lucio Silla and no Nozze di Figaro or Cosi fan tutte? Yes, because you cannot fully understand Mozart without knowing this youth Opera, where the music burns with adolescent ardour, and which deconstructs the canons of the opera seria. Unfortunately, the work is shortened in this version, but Harnoncourt and his team transcend every moment, especially the accompanied recitatives and the extraordinary finale of the first Act. The young Cecilia Bartoli is an incandescent Cecilio, and Edita Gruberova is imperial in the virtuoso role of Giunia.

For the complete set of the Last 3 Symphonies written by Mozart, this is our favorite version : Philippe Herreweghe and the Orchestre des Champs-Elysées are superb. You can also listen to the recordings of René Jacobs with the Freiburger Barockorchester (including astounding Symphonie No. 38) or Nikolaus Harnoncourt with the Concentus Musicus Wien.

Amazingly inspired, Christopher Hogwood recorded together with Robert Levin very beautiful keyboard concertos. The pianofortist ornaments in the most beautiful way and the Academy of Ancient Music accompanies him magnificently. This recording, without a doubt the best of the series, includes one of Mozart’s most moving works, the Concerto No. 20 in D minor. We also recommend the beautiful recordings by Andreas Staier with the Köln Concerto (Teldec), or the two recordings Kristian Bezuidenhout made with the Freiburger Barockorchester (Harmonia Mundi).

This recording brings together the three most beautiful concertos for wind ever written by Mozart: the one for oboe (often played in a flute version), the Parisian one for flute and harp (with its unforgettable andante) and, finally, the one for clarinet which Mozart composed just a few months before his death. The Concerto Köln and its outstanding soloists brings its usual freshness and agility. There are of course other interesting versions of these concertos piecemeal, but none of them offer such a homogeneous panorama.

Kristian Bezuidenhout recorded, at the pianoforte, for Harmonia Mundi a superb complete set of Mozart’s Works for keyboard. This volume includes the beautiful Sonata K.310 in A minor, in which all the delicacy and inventiveness of the South African artist is to be enjoyed. The striking recordings by Andreas Staier (also on Harmonia Mundi) are also great to discover. Although being a bit more cautious, the complete works for keyboard by Ronald Brautigam are also highly recommended.

With their Complete Sonatas for violin and keyboard (the equivalent of 8 CDs!), Rachel Podger and Gary Cooper have made history, throwing all previous attempts on period instruments into oblivion (especially in terms of instrumental technique). The two soloists outdo one another in terms of inventiveness and virtuosity. The ornamentation is superb, especially in the early sonatas, which for the first time turn out to be actually fascinating. These recordings, with which you will navigate from Mozart’s youth to the end of his life, is particularly brilliant, and includes the heart-rending Sonata K.304 in E minor.