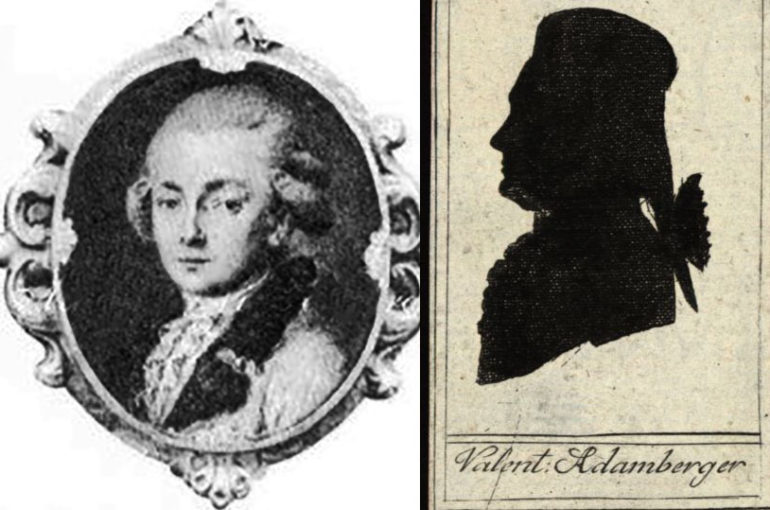 Johann Valentin Adamberger is believed to have been born in 1743 in Munich (or maybe in 1740 in Rohr, Bavaria). His career as an operatic tenor lasted for almost 30 years and crossed Mozart’s path from 1780 to 1791.

Adamberger studied music in Germany with J.E. Walleshauser (Giovanni Valesi) at the Domus Gregoriana, a Jesuit institution in Munich. In 1760, he joined the Kapelle of Duke Clemens. On Clemens’s death in 1770, he was taken into the elector’s Hofkapelle where he held the title of “Virtuoso di Camera de Sua Altezza Serenissima Elettorale di Baviera”, and debuted as an opera singer in 1772. In Munich, he sang, among others, in Il Re pastore from Pietro Alessandro Guglielmi, the role of Ulisse in Achille in Sciro by Pietro Pompeo Sales and an “Ombra” in Gluck’s Orfeo ed Euridice.

Adamberger then moved to Italy. Under the name of Valentino Adamonti, he sang in many opera serie from 1775 to 1777 (Modena, Venice, Florence, Lungo, Pisa, Siena, Rome, Lucca). Among others, he sang works from Giovanni Paisiello (Il gran Cid), Tommaso Traetta (Ifigenia in Tauride) or Giuseppe Sarti (Ifigenia). In 1776, he was Abramo in the oratorio Isacco, figura del redentore by Josef Mysliveček (listen to an excerpt in our playlist).

In 1777, the tenor moved to London where he performed works by Antonio Sacchini, Ferdinando Bertoni and Johann Christian Bach at the King’s Theatre Haymarket. He played the title role in La Clemenza di Scipione, Bach’s last opera for London (see playlist). At the end of 1779 and until the beginning of 1780, Adamberger briefly returned to Italy, singing in Mysliveček’s Armida or in Luigi Caruso’s Artaserse in Florence.

Adamberger’s success in London reached the Emperor Joseph who called him to Vienna, where he joined the new Singspiel Company of the National Court Theater. He made his début there on 21st August 1780, and sang a number of Gluck revivals. Gluck transcribed for him from baritone to tenor the role of Orestes in Iphigénie en Tauride, for the Viennese version of this opera in 1781.

For the Singspiel Company, in 1781, Mozart composed for him the beautiful and demanding role of Belmonte in Die Entführung aus dem Serail. Writing to his father on September 26, 1781, Mozart gave a truly great description of Adamberger’s voice :

“Let me now turn to Belmonte’s aria in A major, ‘O wie ängstlich, o wie feurig’. Would you like to know how I have expressed it – and even indicated his throbbing heart? By the two violins playing in octaves. This is the favourite aria of all who have heard it, and it is mine also. I wrote it expressly to suit Adamberger’s voice. You see the trembling, the faltering, you see how his throbbing breast begins to swell; this I have expressed by a crescendo. You hear the whispering and the sighing – which I have indicated by the first violins with mutes and a flute playing in unison.”

In 1781, Mozart had planned to stage a Viennese version of Idomeneo with Adamberger as Idamante, but this project was never completed. On 23 March 1783, Adamberger took part, with Aloisia Weber, to the Academy given my Mozart at the Burgtheater. There, he sang Mozart’s Concert aria “Misera, dove son” K.369 (initially written in 1781 for soprano). Following the disbandment of the Singspiel Company in 1783, Adamberger remained in Vienna and worked for the Italian company that replaced it. In 1784, Adamberger married the Viennese actress Maria Anna Adamberger (1753–1804); their daughter Antonie Adamberger was to become a popular actress.

In 1783, Mozart wrote two stunning concert arias for the singer. “Per pietà, non ricercate” K.420 was composed as an insertion for Il curioso indiscreto by Anfossi, though finally never sung. It is said that the tenor’s refusal to sing this last aria, on Salieri’s advice, didn’t not stain the friendship with Mozart. “Misero! O sogno … Aura, che intorno spiri” K.431 was written for a concert at the Tonkünstler-Societät (the “Society of Musicians”). For the Tonkünstler-Societät, Adamberger also sang in Mozart’s oratorio Davidde Penitente (1785), in Dittersdorf’s Giob (1786).

At this time, Adamberger and Mozart were probably good friends. They socialized frequently, and as Freemasons were both members of the lodge ‘Zur neugekrönten Hoffnung’ (‘New Crowned Hope’).

In 1793, two years after Mozart’s death, Adamberger retired from the stage but was still a member of the imperial Hofkapelle and an eminent singing teacher. He died in Vienna in 1804.

Considering the works written for him, Adamberger’s voice was undoubtedly full of resources: agile and virtuoso (see the vocalisations of the Clemenza di Scipione or the difficulty of the role of Belmonte), with an easy and brilliant high pitch (the arias regularly go up to B2).

The accompanied recitatives written by Mozart also show that Adamberger was probably a great speaker, though it is believed he was maybe not an actor of exceptional talent.

In this playlist, you can listen to all the works written by Mozart for Adamberger, as well as various compositions quoted in this article, by Mysliveček, Johann Christian Bach or Dittersdorf.