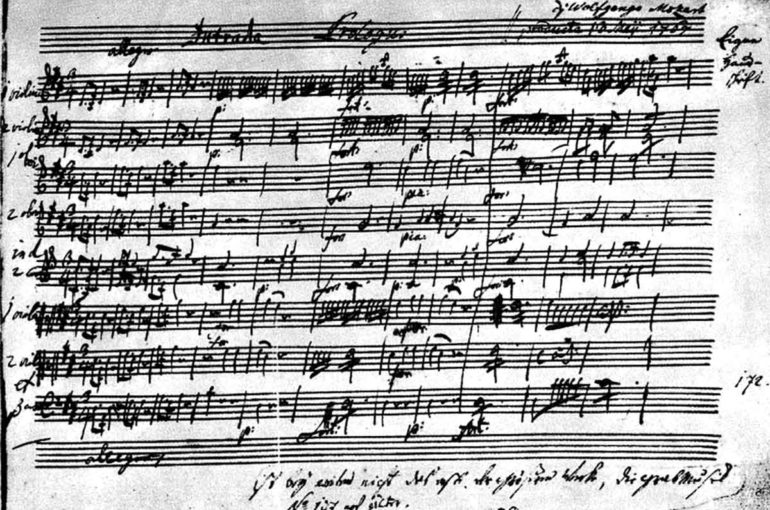 Apollo et Hyacinthus was composed by Mozart at the age of 11, as an intermedium to be inserted between the acts of a five-act Latin tragedy Clementia Croesi (The Clemency of Croesus). At the end of each academic year, there was indeed in Salzburg a tradition of performing Latin plays at the Benedictine University.

The only-male cast included a young tenor, and four boys singing the alto/soprano parts (including the female role of Melia). Twenty-four years later, Mozart would rewrite roles specifically for children’s voices, with the three boys in Die Zauberflöte.

Rufinus Widl, who wrote the libretto, was a Benedictine monk and a professor at the Salzburg university. The libretto is based on the mythological story of Apollo and Hyacinth, from Euripides and, more particularly, from Ovid’s Metamorphoses. Maybe because of its homoerotic theme – the jealousy of Zephyr of the love of Apollo and Hyacinth -, Widl added two other characters : Melia and Oebalus. The work is in three parts, ‘Prologus’ (given before the play), Chorus I (after the second act) and Chorus II (before the fifth and last act).

The young god Apollo is in love with Melia, daughter of Oebalus, king of the Lacedaemonia and also craves the attention of the king’s son, Hyacinthus. Zephyrus, also in love with Melia and full of jealousy, throws a discus on Hyacinthus, which severely injure him. Apollo then turns Zephyrus into a gale and lets him blow away. Apollo turns Hyacinthus into a sea of hyacinth flowers and wins Melia’s love.

According to conductor Ian Page, “Apollo et Hyacinthus displays remarkable maturity, individuality and virtuosity, and there are constant reminders that the eleven-year-old composer had already written a substantial and impressive body of works” (read full article here).

There are indeed several remarkable pages in this early opera: the irresistible and dynamic Intrada which opens the work, the virtuoso and colourful Melia’s aria, or the two duets Melia/Apollo and Melia/Oebalus which show an astonishing musical maturity for an eleven-year-old child.

Our favorite version is the one conducted by Ian Page, on period instruments, with orchestra Classical Opera. The roles are sung by women voices (except Oebalus).

You can watch in this video a show filmed in 1983, and close to the conditions of creation of Mozart’s work in 1767. The main roles, with the exception of Oebalus, are all sung by boys, all soloists of the wonderful Tölzer Knabenchor.