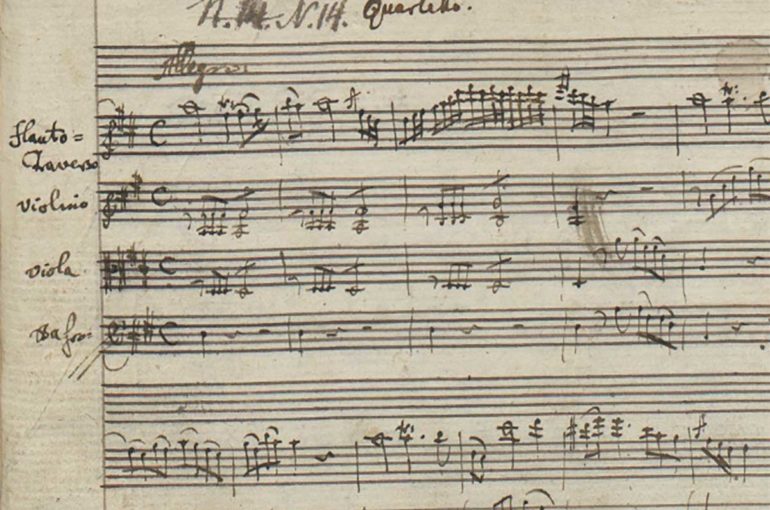 Photo : frontpage of the manuscrit

This quartet for flute and strings is the first of three (K.285, K.285a, K.285b) written in Mannheim between 1777 and 1778 for rich amateur flautist Ferdinand De Jean. Later, in 1786, Mozart would write a fourth quartet with flute, this time probably for friends.

Mozart and his mother had reached Mannheim on 30 October 1777 and remained there until 14 March 1778. Mozart became friend with the flautist Johann Baptist Wendling, one the musicians at the Electoral Court, who introduced him to Ferdinand De Jean. De Jean was a German surgeon who worked for the Dutch East India Company. In December 1777, Mozart wrote to his father that he had accepted a 200 gulden commission from De Jean to write “three short, simple concertos and a couple of quartets for the flute.” The concertos in question are the concerto K.313, a transposition of the oboe concerto K.314, and the andante for flute and orchestra K.315. In the end, it seem that De Jean had paid Mozart the sum of 96 gulden.

The quartet K.285 begins with an Allegro full of freshness and charm. The contrast with the second movement, in B minor (a very rare key for Mozart), is all the more important. In this Adagio, the flute delivers a heart-breaking melody, accompanied pizzicato by the strings. The final is a energic Rondeau.

Watch this beautiful version played by flutist Barthold Kuijken, with members of the Kuijken Quartett.